The old Rapp Schoolhouse is one of the few if not the only one-room eight-grade schoolhouses in Kansas that still has its original desk and textbooks. Because of its uniqueness, its location on the Santa Fe Trail, and the special place it has in the hearts of its neighbors and former students, it has been made a National and State Historic Site to be used as an education center where urban and suburban elementary classes can come to spend a day, where families can hold reunions, and where visitors can go beyond the nostalgia of the period 1929-1959 to experience the contributions made by one-room schools in our rural communities and to our society as a whole.

The first school at the site was a one-story wooden building, finished in 1871, being built at a cost of approximately $175. Fifty seven years later, in 1929, the present brick building was built. Because Rapp School is completely intact as it was in the 1930's, present day students and their teachers can come and spend a day at the one-room school just as it was operated at that time. Period curriculum materials, including standardized achievement tests, can be used in lessons taught.

The beautiful brick building and play-round adjoins Rapp Cemetery, where many early family names may be found. During its early years, the schoolhouse, located five miles west of Osage City on Highway 56, was an integral part of the Rapp village which was located along the Missouri Pacific railroad, a couple of miles east and south of the schoolhouse. The rural Rapp community consisted of about a dozen homes, a railroad crossing, a produce station, a general store, a lumberyard, a blacksmith shop, and a stockyard. Only four of the former homes remain.

The community and the schoolhouse was named after C. J. Rapp who owned a large amount of land in the area.

Classes at Rapp school District Number 50 commenced in 1871 though the first teacher was hired in 1872. The last year classes were held in the schoolhouse was 1962.

The building is unique not only because of its straight and true red brick exterior but also because it has a full basement with windows, electricity pre-dating Rural Electrification, and a pump and sink.

The two-story bell tower is firm and the bell rings crystal clear. The building still has all of its original furnishings, including a teacher's recitation, and student desks, cloak hooks and bucket-lunch cupboards, wall maps, counting sticks and books, dual-purpose sand table and piano.

A visit to the school and its south lawn playground is like taking a walk back to the first day of school in the early 1900's. 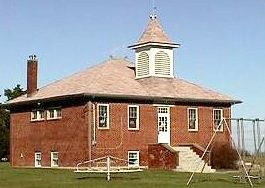 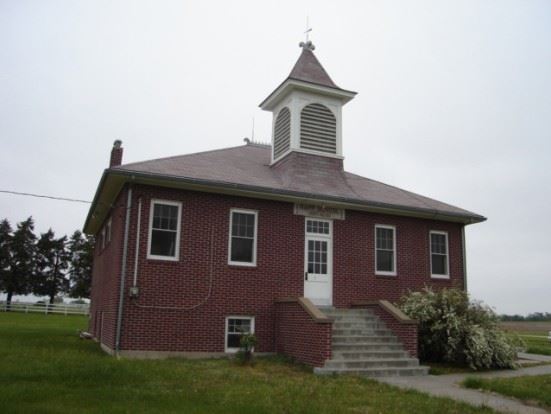